EOS transactions can be rolled back by its centralized government. An example was posted on a Reddit thread from the user u/auti9003. In it, it’s proven how EOS can rather easily rollback changes in the event, as was the case here, of an account being phished. The immutability of a blockchain, a key feature, does not seem to be a priority for the number 6 ranked crypto by market cap.

EOS, one of the most hyped popular cryptocurrencies, is apparently capable of rolling back transactions made between two accounts. This has been brought up in a Reddit post of the user u/auti9003, who raises this concerning issue for the whole community. To prove it, a posted screenshot of an alleged resolution that returns control of some funds to the owner appears to be pretty compelling evidence.

In the resolution, later offered as a complete document available here, there are some interesting actors: a claimant, identified as VH; an arbitrator, identified as Ben Gates, and a respondent, unidentified. 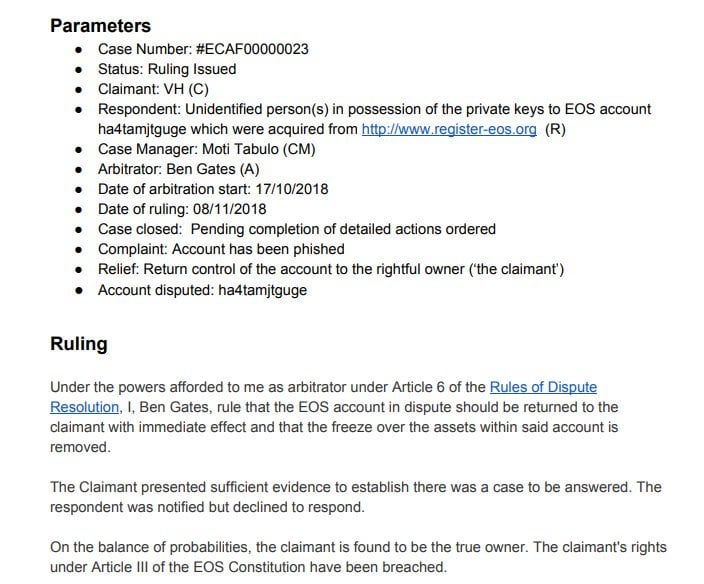 EOS arbitration system is pretty complete. But this raises a lot of questions about the whole system and how arbitrators are being chosen. While there is a clear criterion for choosing EOS arbitrators (more on that here), we cannot be fully sure that these criteria are being respected by the organization, or how the cases are being distributed between these officials.

Is EOS a Blockchain?

One of the most important traits of the blockchain and proof of work duo is the inability of rollback transactions without a serious amount of effort, if at all. This means that even if a transaction is deemed to be rolled back for any reason, it would be impractical to do so. This characteristic is key to define what a blockchain is.

EOS, with its centralized government and the ability to roll back transactions (even if it is for a right cause), is undermining the main feature that makes blockchain trustless. The document mentions that this is a fairly new procedure for them.

According to this procedure, anyone can claim EOS tokens as their own as long as they have access to the private key. The only stop-loss would be the cost of the arbitration procedures, which would be deducted from the account after the action is taken. The arbitrage for this case, in particular, amounted to $400 or almost 70 EOS.

This new kind of procedures made by the people in charge of EOS will certainly raise some heavy fire among the cryptocurrency community. This kind of malleability, the ability to change the blockchain, to rollback or amend transactions, could be seen as a good thing by some, but the vast majority of the crypto community considers this as a terrible idea.

EOS is functioning as a sort of financial institution with the ability to mediate between two parties. Purists point out cryptocurrencies must be trustless and permissionless, and transactions should be absolute, even if the purpose of these is not the noblest one.

CONTINUE THE SPICE and check out our piping hot YouTube channel. Our podcast, Milk, might help sooth that crypto burn. Follow CoinSpice on Twitter. Join our Telegram feed to make sure you never miss a post. Drop some BCH at the merch shop — we’ve got some spicy shirts for men and women. Don’t forget to help spread the word about CoinSpice on social media.